Tasks with "Is this task billable?" Flag

At present there’s a field in the Tasks API labelled “is_billable”; I understand that this is from the billed / unbilled hours on the task.

It would be great if (and I initially thought that the “is_billable” field was this) there was also a flag showing the status from whether the “Is this task billable?” checkbox was checked on the FreeAgent site.

So as well as the past billed hours of this task, once invoiced, you could see also whether it was down to be billed in the future.
Many thanks.

“is_billable” does what you initially thought. It tracks the “Is this task billable?” flag on a task.

Any particular reason you now believe it doesn’t?

Your support technician said if referred to a flag that said whether it had been billed, rather than will be billed in the future… 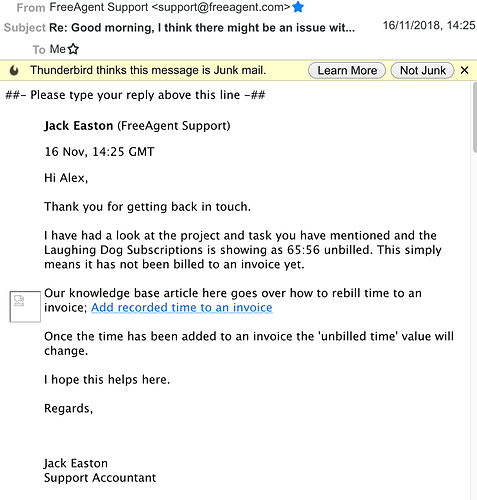 Just a quick message to let you know that I’ve reached out to you via email to troubleshoot this issue further. If you could take a look at my message and reply at your convenience, I should be able to help clear things up for you.